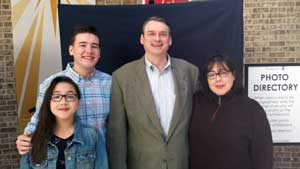 “…After being absent in body and mind from the Episcopal Church for some twenty years, we ended up here, with baptism as a catalyst…”

“When are you going to get those kids baptized?” my brother Bill inquired in a loving but (I perceived) kind of sanctimonious way.

My brothers and I were raised in The Episcopal Church from birth. I was baptized and confirmed and went to Sunday school. Our father dragged us to church every week, no matter what. I had a difficult relationship with my father that would take many hours to explain, but if you’ve read Jeannette Walls’s book The Glass Castle you will get an inkling of what my life was like.

My husband Louis and I met as students at Texas Tech and found that we shared a lukewarm interest in church. He also came from Episcopal roots and was baptized, but his family showed no interest in the faith during his childhood and he never attended church. What were the odds that two very different people with two very disparate lifestyles would end up having the Episcopal faith in common?

Louis and I spent the next two decades on “sabbatical” from the church. Our mutual apathy and inbred laziness limited our church going to the two holy days of obligation: Christmas and Easter.

We, of course, attended weddings and a few funerals, so we weren’t completely irreligious. And there were spiritual experiences—the birth of our son for one! Still, when Ben was born, we continued on the same spiritual path: church two times a year followed by a delicious brunch. Ben didn’t know any better and we liked it that way.

Things changed when my father ended up living his last year at the Texas State Veterans Home in Bonham, TX. At about the same time, I found out I was to have a new baby—our sweet Sophie. My father passed away a month after she was born. It was then that my brother, who was inexplicably closer to my father and more disciplined in the Episcopal traditions, asked me that question, ”when are you going to get your kids baptized?”

Until that point, it had not occurred to me or to Louis that baptism was that important. I became determined to get those kids baptized, though—maybe because baptizing my kids could symbolize a rebirth of my relationship with my own dad. I don’t know, but we had family coming in from out of town for Thanksgiving and the timing was ideal, so we decided to make it a party.

As we soon learned, getting baptized in the Episcopal Church is not like making a reservation at your favorite restaurant. You actually are required to be an active and faithful member of the church. That is to say, you can’t just pop in and ask to be baptized. Louis and I had visited quite a few churches, but couldn’t really remember any of them. There was an Episcopal Church just two miles from our house that seemed welcoming, but they only had services in Spanish. So, the prospect of planning our children’s baptisms and a Thanksgiving dinner for twelve became complicated by the fact that I would have only three weeks to learn Spanish.

I was discouraged until my brother Bill stepped in and asked the Rector who visited my dad at the VA hospital for the last few months, and who would eventually give him his last rites, if he would help our family. He graciously agreed on the condition that we become members of a church immediately when we returned to Dallas. We committed to that promise, and Father Dalton baptized my children in November of 2004. The reception that followed was one of the most loving memories of that day. Worshipers at this tiny church of Holy Trinity welcomed my whole extended family into their church, offering us their homemade cakes and unpretentious, sincere hospitality knowing that while we weren’t members of their parish, we were members of a shared faith. Thanksgiving came and went and Christmas loomed. We still had not found a church. Now we were really feeling guilty about Father Dalton’s directive.

Holidays are always a great motivator for me: cleaning the house, decorating, planning the menu, …and finding a new parish. More relatives were coming into town to visit and this was the week we had to find a place. We decided on the Episcopal Church of the Transfiguration, because my brother thought we had attended this church back in the 80’s when we lived here with Dad. We hadn’t, but I didn’t argue—it just saved time.

We showed up at Transfiguration for the 8:00 p.m. Christmas Eve service, at 7:40 p.m., thinking, “Let’s get there a little early so that we can sit up front!” Our entourage included aunts and uncle, a seven year old, an 89-year-old grandmother with a walker, and a baby. How could we have known that the place would be packed and that you needed tickets? We were frustrated, cold, and mostly embarrassed at our poor planning. One of Transfiguration’s (heroic) ushers saw us and took action, moving people (who had tickets, I’m sure) to seat us. She did not scold us. She did not turn us away. She just made sure that we had a place here. And that is why we stayed.

We immediately got Ben started in choir and attending Sunday school. It was a shock to a body that was used to sleeping in on Sunday mornings. He trained to be an acolyte and helped in Sunday school and VBS (not without some bellyaching and whining). After a few years he just wanted to be here because people depended on him and he knew it, and did not want to disappoint them. He was mentored by dozens of people who continue to influence and support him today. This past winter while away at UT Austin for college he managed to find time to lead a weekly bible study (letters of Paul, always a nice choice!) at All Saints Episcopal Church in Austin. We nearly fainted. Our daughter Sophie participates in many programs with the same frequency as her brother, and we hope she becomes a big player at Transfiguration, as well.

As for Louis and me, we happily do whatever anyone volunteers us to do. Louis has helped with Habitat for Humanity and continues in Youth Ministries. He has helped with kid’s Breakfast Club and currently helps with the this year’s Youth confirmation class. I started helping in Sunday school and then moved to VBS. It was a natural fit as I had to take my kids to their class and I had nowhere else to go. I have extensive experience in hospitality, so helping with events just seemed natural. Then I was introduced to the Altar Guild, a ministry that I adore beyond words! I think it is the heartbeat of the church. The ladies, and some gentlemen, know and keep the precious history of the Fig, and I am indebted to this ministry for all their guidance, love, and friendship.

I write this on the cusp of Pentecost, the birthday of the church. During this season we are asked to renew our commitment to God and to our church, and to use our gifts to share God’s love for the world. We can’t do it alone and we must be active. So, after being absent in body and mind from the Episcopal Church for some twenty years, we ended up here, with baptism as a catalyst, but this time with a little more intention and a lot less passiveness.