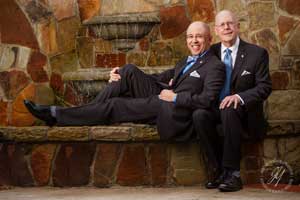 Our journey to Transfiguration was a circuitous one. John and I were raised Roman Catholic. John is from El Paso and attended elementary school at St. Pius X Catholic School and high school at Cathedral High School. I am from Rosenberg (near Houston) and attended the Holy Rosary Catholic School through the eighth grade before moving on to the local public high school. We both attended Sunday mass “religiously” into adulthood. We met in 1988 in Dallas while attending services at Dignity Dallas (a non-sanctioned gay Catholic group). We continued to attend Sunday services and sang in choirs at various Roman Catholic churches in the Dallas area. One of the prayers I offered each week at mass during the Prayers of the People was for the “enlightenment of the pope and the church hierarchy.”

It became increasingly apparent that the unwelcome environment within the Roman Catholic Church was not going to change. A couple of years ago, John found a newly formed parish (Our Lady of Consolation) that was associated with the Independent Catholic Church of the Americas. He attended mass one Sunday while I was out of town. When I returned home, he told me about his experience that weekend. He told me that the pastor of the parish was gay and partnered and that most of the attendees were also gay. Our Lady of Consolation became our new spiritual home. For the first time in our adult lives, we finally felt that we were loved and accepted and that we could truly be ourselves. In 2014, we were married in a religious service with the full support of family and friends at Our Lady of Consolation. In November of 2014, we learned that Our Lady of Consolation would be closing its doors because the facility we were using for our Sunday services (on the campus of Cathedral of Hope in Oak Lawn) would no longer be available to us.

We began our search for a new spiritual home the very next Sunday. I suggested that we try Transfiguration as our first stop. We (along with other congregants at Our Lady of Consolation) had participated in the NOH8 Campaign photo shoot at Transfiguration in 2014. My thought was that if a church sponsored the NOH8 Campaign photo shoot, there was a chance that they would be accepting of us as a couple. Another plus in favor of Transfiguration was the existence of GLF as one of the adult ministries sponsored by the parish. John contacted Father Casey via email regarding Transfiguration’s position on LGBT members. Father Casey assured John that we would be accepted as a couple and would be warmly welcomed.

We attended Transfiguration for the first time on the First Sunday of Advent in 2014. Neither of us had attended Sunday services at an Episcopal church so we did not really know what to expect. To our relief, we felt right at home during the service and were able to fully participate. While reviewing The Notices after the service, we discovered that the GLF Christmas party was being held the following weekend and decided that attending would be a great opportunity to meet a lot of people. We were not disappointed. We received a warm welcome from everyone we spoke to. This convinced us (not that it took much convincing) to continue attending services at Transfiguration. We got “Dingwalled” on the Second Sunday of Advent. Ellen told us later that she had started telling people about us but was told “Oh yeah…we met them last weekend at the GLF Christmas party.”

We participated in The Way in early 2015 and were received into the Episcopal Church on May 17, 2015. We are active members of GLF. We are both volunteers at the Transfiguration Food Pantry. We also volunteered to serve the needy of Dallas along with others from Transfiguration at the Thanksgiving-eve dinner served at the Austin Street Center in 2015. I decided to get really involved in parish activities and volunteered as a photographer for the 2015 VBS. It was my first exposure to VBS and showed me that the staff and members at Transfiguration are always living the words of the Baptismal Covenant to “seek and serve Christ in all persons.” John and I continued our involvement by volunteering as photographers during the 2015 NOH8 Campaign photo shoot in March 2015. We are also both on the Executive Committee for Transfigured Nights and are responsible for the photography at all Transfigured Nights events.

I must say that our time at Transfiguration has been very fulfilling and has helped to strengthen our relationship and our commitment to God and each other.