The 80th General Convention of the Episcopal Church

This month, I had the honor of attending the 80th General Convention of The Episcopal Church. Originally scheduled to take place over 14 days in 2021, this General Convention was first postponed for a year and then shortened to four days due to lingering concerns about the spread of the Covid-19 virus. As a first-time deputy, the learning curve was steep and the work extraordinarily fast-paced. I am grateful to have been warmly received into the Dallas deputation – one of the highlights of my time in Baltimore is the friendship and camaraderie among our group. Another highlight was access to Maryland crab at just about every meal!

We met for three sessions each day, breaking for lunch and dinner and meeting until 8:30 or 9:00 each evening. We considered a total of 431 resolutions. Of course, four days are not sufficient to discuss and debate so many resolutions; as a result, many were passed using a consent calendar process. Likewise, one e-news article is not sufficient to describe to you all of the decisions we reached. Below, I highlight several important matters that we considered in the House of Deputies and that were also approved in the House of Bishops.

Racial Justice & Truth Telling. Resolutions focused on racial justice and reconciliation, as well as truth telling, were among the primary points of discussion and debate. Our opening Eucharist began with an acknowledgment that the land on which we were meeting once belonged to Indigenous people and included a Litany of Penitence for the role of the Episcopal Church in their displacement and oppression. Later that day, we took up Resolution A125, which established and funded the Episcopal Coalition for Racial Equity and Justice as a voluntary association of Episcopal dioceses, parishes, organizations, and individuals dedicated to the work of becoming the Beloved Community. We then turned to Resolution A127, which created a fact-finding commission to investigate the role of the Episcopal Church in Indigenous residential boarding schools. This commission is charged with preserving and sharing the stories of Indigenous children and youth who were harmed while attending Episcopal boarding schools.

LGBTQI+ and Women’s Issues. Much of our discussion and debate focused on the health and safety of LGBTQI+ individuals and women. We passed Resolution A063, which created a new Director of LBGTQI and Women’s Ministries for The Episcopal Church. We also passed resolutions extending paid family leave and health insurance to lay and ordained church employees, urging all dioceses to adopt uniform leave policies for all employees, and affirming women’s rights to access reproductive health care. In the House of Deputies, we talked for over an hour about whether The Episcopal Church should avoid holding future General Conventions in states where women’s access to reproductive health care and/or the safety of LGBTQI+ individuals is curtailed. In Resolution A001, we specified three criteria to be considered in future site selection: (i) that conditions at the site do not pose an immediate threat to the physical safety and well-bring of our members; (ii) that care will be taken by the planners to ensure the physical, mental, and emotional well-being of participants in General Convention; and (iii) that General Convention will witness to Jesus’ countercultural way of love.

Defining the Book of Common Prayer. We talked extensively about how we can better define the Book of Common Prayer. In the 40+ years since the current BCP was approved, the Episcopal Church has made available a variety of supplemental, experimental, and trial liturgies. Some are published in a Book of Occasional Services and are available for use in all parishes. Others (including the liturgies in Enriching Our Worship, the Expansive Language liturgies passed in 2018 which we use here at Transfiguration, and liturgies for marriages of same-sex couples) may be used only with the permission of the diocesan bishop. In Resolution A059, Article X of the Constitution of the Episcopal Church was amended to reflect that “The Book of Common Prayer is understood to be those liturgical forms and other texts authorized by the General Convention in accordance with this article and the Canons of this Church.” This constitutional amendment must pass a second reading at our next General Convention in 2024. Thereafter, any liturgy authorized by General Convention in accordance with our Constitution and Canons will be elevated to prayer-book status and be available for use in all parishes.

Historic Elections. We conducted elections for 46 positions. Notably, we elected lay deputy Julia Ayala Harris from the Diocese of Oklahoma as President. She is the first Latina and the youngest person elected to this position. We also elected The Rev. Rachel Taber-Hamilton from the Diocese of Olympia to serve as Vice President. She is the first Indigenous and first ordained woman to hold that position. As a result, the House of Deputies is now led by two women of color for the first time in history!

Budget. We had only one joint session with the House of Bishops, in which we discussed the budget for the 2023-2024 biennium between now and the next General Convention. The proposed budget was presented on behalf of the Joint Standing Committee on Program, Budget & Finance (PB&F) by two Texans: The Rev. Mike Ehmer, from Northwest Texas and Bishop Suffragan Jeff Fisher of the Diocese of Texas. We passed a $100.5 million budget for this biennium. As Katie Sherrod of Fort Worth summarizes, we will now

You can read more about this General Convention and access each resolution that was passed at www.generalconvention.org. The 81st General Convention will be held in Louisville, Kentucky in July 2024. I have agreed to run to serve as a Deputy from the Diocese of Dallas and, if elected, look forward to serving the Church there as well.

See you this weekend!

[1] Katie Sherrod, “GC80”, published online by The Episcopal Diocese of Texas at https://www.epicenter.org/gc80/. 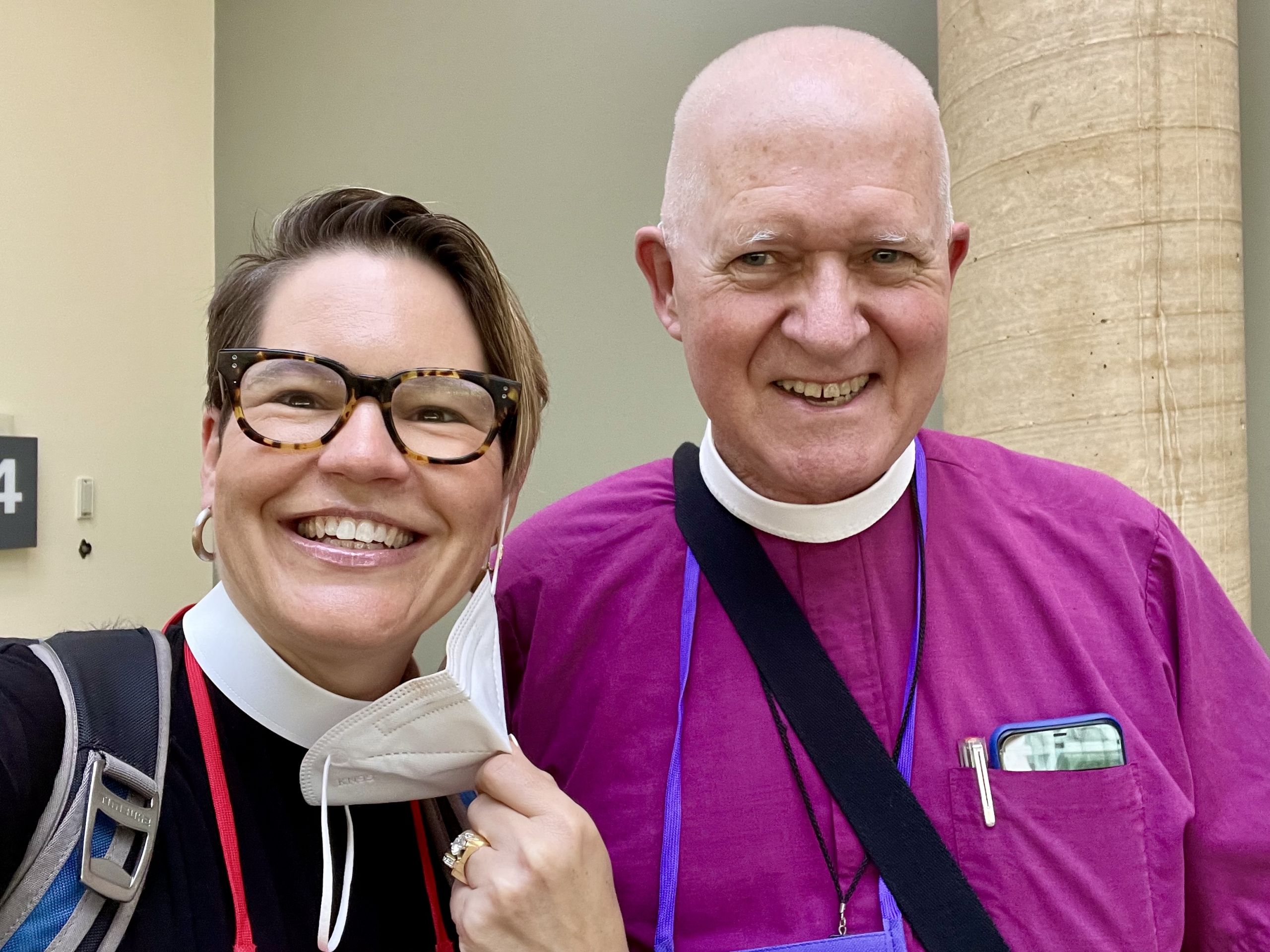 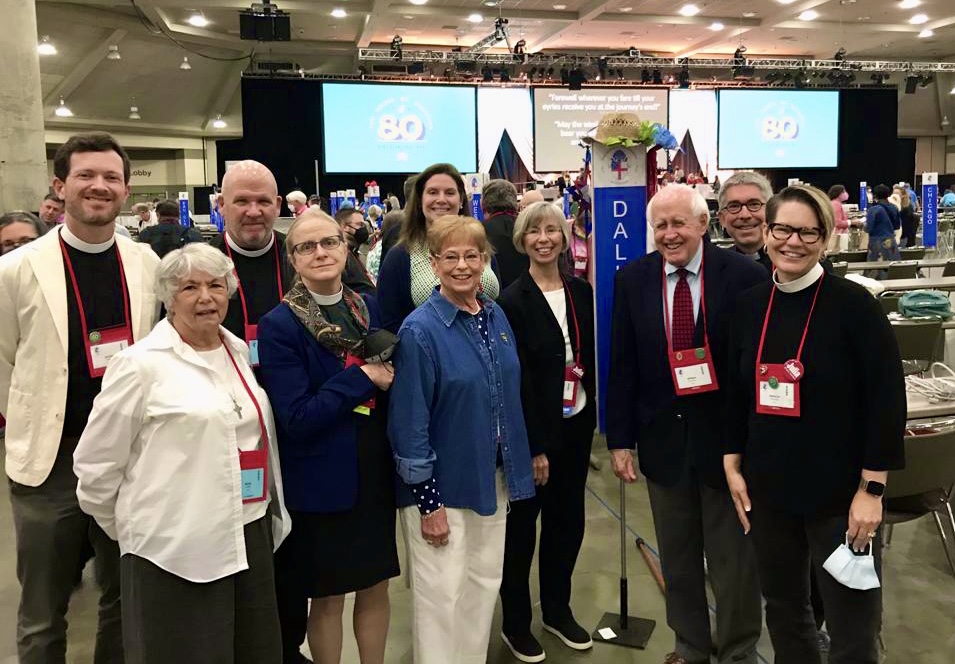 The Dallas Deputation at General Convention