For God So Loved The World

From the Rector
For God So Loved The World 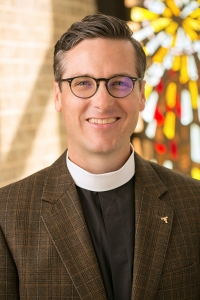 When I was in college I spent a lot of time at Camp Allen, the camp and conference center of the Diocese of Texas, situated in the Piney Woods. I drove there from Austin at least twice a month, and more in the summer. At some point during one of those long drives, I found a Christian radio station that played recordings of sermons, and I found that listening to them kept me engaged and awake better than pop music, even when what they were saying seemed a little strange. I still remember clearly one particular radio sermon that was all about the “End of Days” (now I realize they’re nearly always about the “End of Days”), and how things are going to be really great some day in the future when Jesus comes back, whenever that is.

Which got me thinking for the first time…are we all just hanging around until some future date? Is that what Christians really believe, that God isn’t really invested in us until someday in the indeterminate future? Is this world of injustice, sickness, and violence just something we have to accept until a later date? Because we need a God who is now, who cares about us today, and who is invested in our world and our lives in the present.

I believe with every fiber of my being that God is just as interested in our world today as God was at its creation. God is just as invested in our well-being as God was then. God is God, yesterday, today, and tomorrow, which means that the fundamental characteristics of God weren’t only true in the past, when God seemed “to care more,” but they remain descriptive of who God is today. I don’t believe God is hiding and waiting to jump out of cosmic cake and bring about some sort of wonderful, improved reality in the sweet bye-and-bye, when all wrongs will be righted and all evils set straight. God is here, even when our world’s original goodness seems masked behind a murky film of sin and evil, and Jesus tells us that God’s kingdom is somehow present even now, a layer to Creation that we can’t always easily distinguish with our naked eyes, but is no less real.

“For God so loved the world,” we hear in perhaps the most famous line from the whole Bible, a line we’ll read in church this weekend (John 3:16). The Greek word John uses in the original text that gets translated “world” is cosmos. God loved the whole cosmos. Everything. And because God loved this world God sent his Son into it. Why did God send his Son? So that everything would end, and he could take another crack at it? No! God sent his Son into this world, the one we’re living in right now, to save us. It’s about rescuing your holy, flawed, gift of a life, and the lives of each and every person in this world. God wants it all to be made right, to be repaired and restored. God wants us to be reconciled to each other, to end our conflicts and violence and injustice. God wants the hungry fed, the naked clothed, the sick comforted. God wants this world to be transformed into the one he intended. God isn’t waiting to do all that until after we die, or until some future day. God sent Jesus Christ into this world to inaugurate that reality now.

I hope you’ll come out tomorrow (Saturday) afternoon at 4:00 p.m. and help us work toward a little bit of that just and loving heavenly reality. We’re filming a group appeal to General Convention to ask them to take more steps to make marriage equality a reality. It would be wonderful to have a great big mass of people ready to stand witness together for our gay and lesbian brothers and sisters who long to be treated equally and finally be able to get married in their own church. We can’t wait for the great bye-and-bye in the sky. We can’t hope it one day happens in the future. The time is now. So, pray and work for the kingdom to be known more fully right here in our midst, as it is in heaven.

Peace be with you all,