This last week has been so hard for so many. The struggles have been extreme – lengthy power outages, dangerous roads, frigid homes, frozen water, burst pipes. After a year filled with challenges, these latest hardships have felt that much harder to handle. So, if you’re feeling like you’re at the end of your rope, I understand. If you’re feeling like you don’t know how much more you can take, you’re not alone. The words of the Psalmist may ring true,

“Save me, O God, / for the waters have risen up to my neck.
I am sinking in deep mire, / and there is no ground for my feet.
I have come into deep waters, / and the torrent washes over me.” (Psalm 69)

Sadly, the church did not escape the effects of the cold. Despite all our best efforts to prepare for the worst – dripping faucets, leaving heat on in vulnerable places, and Bracken Reece even braving the roads daily to check on the entire campus – storms like this are humbling reminders that there is a limit to what we can control.

And so, on the morning of the strangest Ash Wednesday in memory, a frozen pipe burst in the ceiling just outside the north transept (near the childcare wing). Without anyone in the building to turn off the water, it continued to gush forth, slowly filling the surrounding area, including the nave. In a few hours’ time, nearly two inches of water stood in every corner of the church, from transept to transept to all the way to the Gathering Space, and was inching past the Memorial Garden toward Roper Hall. 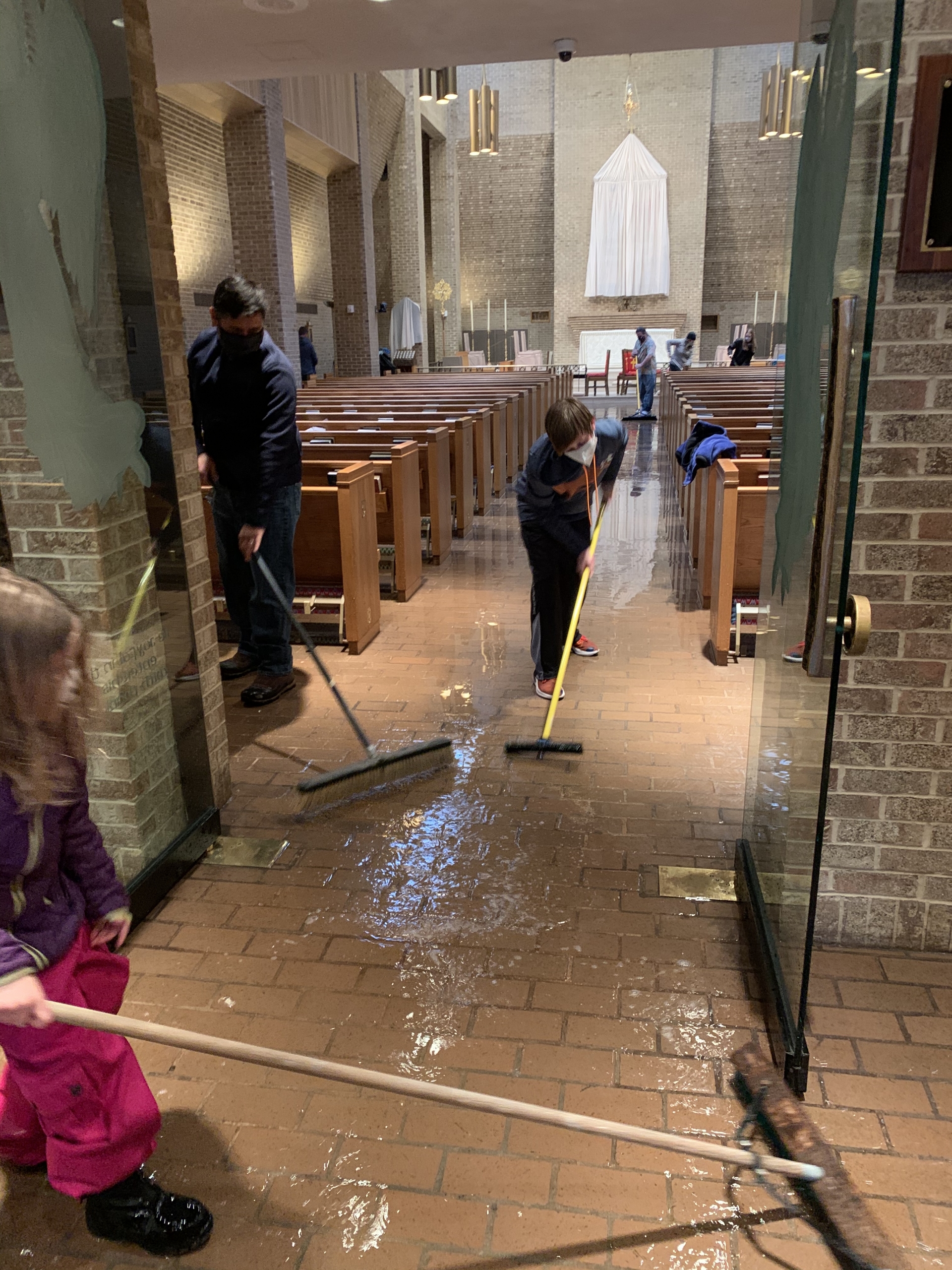 The burst pipe was part of the fire alarm sprinkler system, which meant that it triggered our emergency system. Normally, the sound of the alarm would alert everyone on campus and all our neighbors. But, of course, no one was on campus, and the sound of the alarm, muffled by the snow, didn’t ever reach the ears of our neighbors who were all shivering in their homes. A local Fire-Rescue team was dispatched to the church, but when they arrived and saw the leak, they called only one number from our contact list. It was the office number.

Tragically, this was all something that thousands of home owners and businesses in our state have had to deal with in recent days, perhaps including you. Texas is going to be cleaning up this mess for a long time. And hopefully, we’ll also ask ourselves and our leaders some important questions about how we got into this situation in the first place. It didn’t need to be like this.

Thankfully, our story is filled with grace. Just when we were reaching a critical moment, when the damage might have become irreparable, we caught a break. A neighbor, John Selzer, happened to walk by the church, and he heard the alarm. Rather than assume that the situation was already being handled, he decided make a quick call to his down-the-street neighbors, the Teeples, who he knew to be members of the church. Jordan immediately texted me, and I got in touch with Bracken Reece. Soon, Bracken and his friend, Jerry Welch, who also performs electrical work at Transfiguration, arrived and turned off the water. I arrived shortly thereafter. 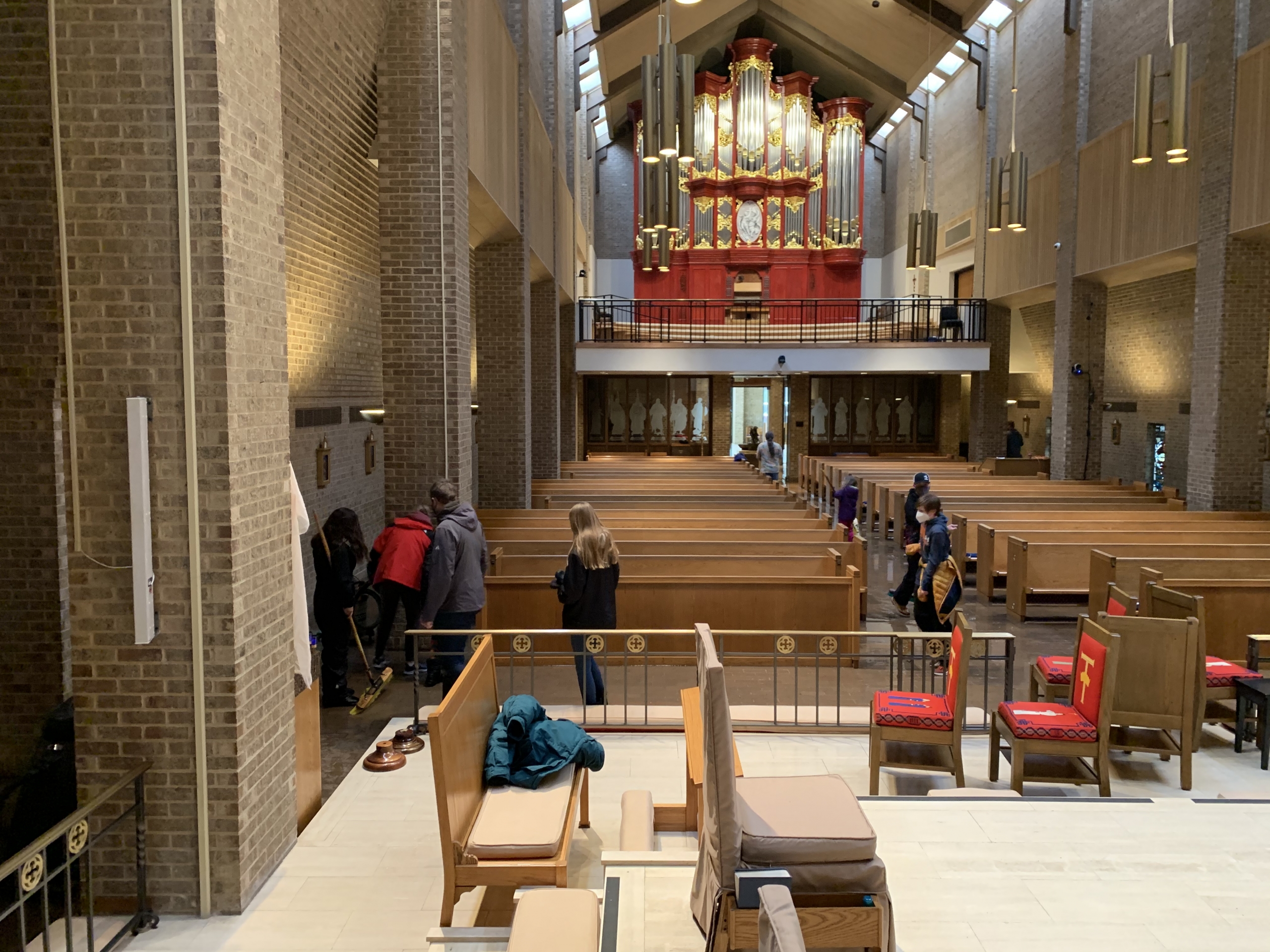 Without John Selzer, a Good Samaritan if ever there was one, this story would have an entirely different outcome. It could have been several more hours, or longer, before the leak was discovered. By then, it is hard to imagine the possible extent of the damage. So, never underestimate the power of a phone call when something is not right. Heroes are made when ordinary people care enough to speak up.

When I arrived, I immediately notified Sr. Warden Oliver Cone, who then called in the help of a few parishioners who live nearby. Soon Cesar Hernandez, Eric Smith, David and Janet Wilson, Jodi and Kirby Dalton, Oliver and Wendy Cone, and Jordan Teeple – with a whole troop of hard-working kids! – showed up. And also our Good Samaritan, John Selzer, along with his wife, Elizabeth, who brought a wet vac and immediately pitched in to help. Four hours of intensely hard work later, and we had moved all that standing water out, and blowers were set up to dry the floors, walls, and furniture.

I had to pause several times for the tears in my eyes at the sight of everyone quietly laboring away, including young Ruthie Teeple, wielding a broom that was taller than her for hours on end. Let me tell you, our church was filled with many humble prayers this Wednesday, but it was sweat and not ashes that adorned our heads.

We have already begun the work of restoration. Insurance has been contacted, and the first inspections are being performed today (Friday) to survey the damage. But the church will be okay. Water never rose to the level of the chancel, nor the pew kneelers. It did not reach the delicate components of the Ross Organ, and we moved the Phoenix Frontal to safety. Power remains on, so lights and heat continue to operate normally for now. The brick floors and walls of the church shed the water quickly, and the hallways are drying out, too, if more slowly. It will take a few weeks to evaluate more carefully, including below the church, but we know we escaped the worst.

It’s proof of what we fundamentally believe: the worst thing is never the last thing. Storms do not have the last say. The Spirit hovers over the watery chaos. So if you are cleaning up your own wrecked home, or battling fear and worry about the future, don’t lose hope. Grace abounds. With God’s help, manifested in the love of one another, we will overcome this and every challenge.