The Problem with the World 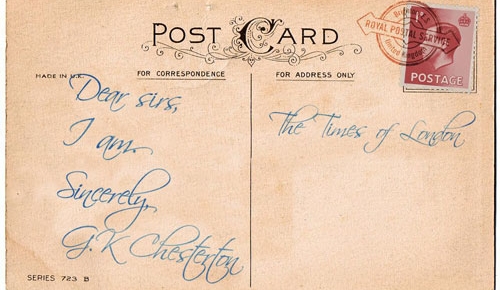 There’s a story that I’ve shared with you before that has been once again rattling around in my mind this week. In the early 1900s, The Times of London invited people to write in letters addressing the question, “What is wrong with the world.” They received all manner of replies, as you might expect, and the momentum of naming the failings of others was building, until the paper received its shortest reply, this one from the famed writer and philosopher G.K. Chesterton.

In response, The Times immediately pulled the series.

A century later, I’m surprised that we haven’t seen a reboot of that series…only this time, I can’t imagine a letter to the editor impeding the barrage that would ensue.

We are quickly becoming a society whose greatest skill is identifying the problems of others. It’s a skill that is being carefully refined in the echo chamber of social media. Meanwhile, there is a diminishing supply of humility, the kind that leads us to spend more time considering the plank in our own eye than the speck in someone else’s. Christians have not been immune from the temptations of this age, and we seem just as likely to join in the frenzy as anyone else.

This weekend we will reach the section in the Sermon on the Mount when Jesus has some important and sobering words for those of us who would follow him (Matthew 5:21-37). He cautions us against standing on a soap box and deriding others for their wrong behavior, when within us is a swirling pool of anger and contempt. And we should be careful about accusing others of moral failings when we are nursing the spiritual poison of hatred. Because the content of our minds is every bit as indicative of the health of our souls as our outward behavior.

The next nine months are going to be a major test of us who want to live faithfully. The world is going to tempt us to lash out at everyone we think is wrong as though they are an enemy. Lord knows, it’s going to be hard to resist. But I hope we will choose to spend more energy working on ourselves – recognizing that we can best affect change in the world by refining the contents of our own souls, rather than lining up to identify the failings of others. I hope we can be the kind of church where we are more ready to consider our own need for mercy and forgiveness than the faults of others. I hope we can resist self-righteousness and embrace a true spirit of humility.

I hope we can be G.K. Chesterton to an angry and judgmental world.

It may not be as thrilling or gratifying, but it will be how we stay close to Jesus, and that’s right where we need to be. 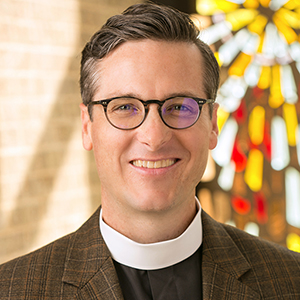 Fr. Casey became the fourth rector of Transfiguration in October 2014 after having served churches in Rhode Island and Houston. He is married to Mtr. Melody Shobe, also an Episcopal priest, and they have two daughters, Isabelle and Adelaide. Fr. Casey grew up in Temple, Texas, and holds a Bachelor of Arts from the University of Texas at Austin. His Master of Divinity was earned at Virginia Theological Seminary and his Doctor of Ministry at the School of Theology at the University of the South (Sewanee). He loves playing golf, road cycling, hiking, brewing beer, and working in his yard. You can contact Father Casey by email.