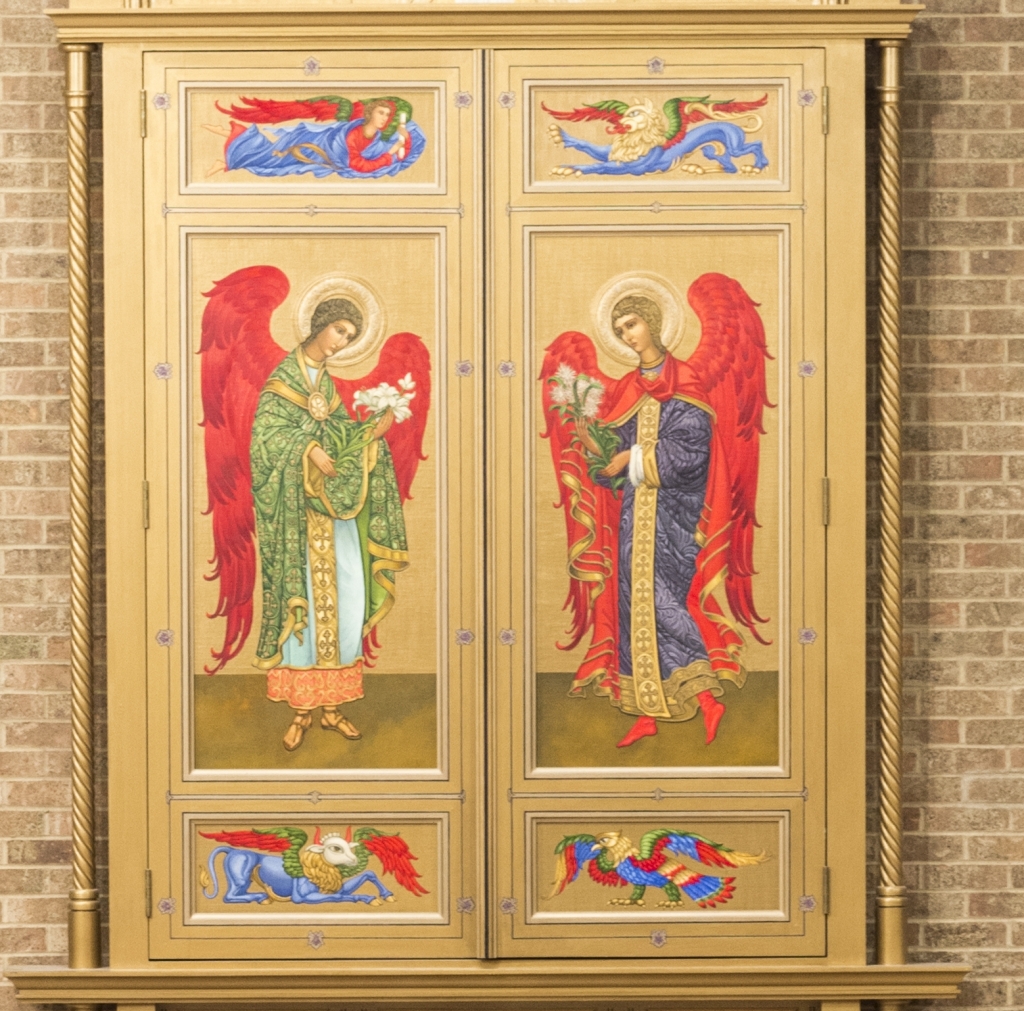 During the seasons of Advent and Lent, the doors of our triptych are closed. In Lent, the closed triptych is then covered by a shroud, in keeping with the tradition of veiling the cross and other sacred images during that season of penitence. But during Advent, we leave the triptych uncovered so we can gaze upon the two figures who adorn the doors. They are angels, of course, but not just any angels. They are Gabriel and Michael, and these particular angels have much to do with Advent.

On the left is Gabriel, who bears a lily, which is a traditional symbol of the Annunciation. It was Gabriel who appeared to Mary in Nazareth and shared with her God’s desire that she bear God’s Son.

“In the sixth month the angel Gabriel was sent by God to a town in Galilee called Nazareth, to a virgin engaged to a man whose name was Joseph, of the house of David. The virgin’s name was Mary…The angel said to her, ‘Do not be afraid, Mary, for you have found favor with God. And now, you will conceive in your womb and bear a son, and you will name him Jesus. He will be great, and will be called the Son of the Most High, and the Lord God will give to him the throne of his ancestor David. He will reign over the house of Jacob forever, and of his kingdom there will be no end.’

Mary said to the angel, ‘How can this be, since I am a virgin?’

The angel said to her, ‘The Holy Spirit will come upon you, and the power of the Most High will overshadow you; therefore the child to be born will be holy; he will be called Son of God (Luke 1:26-27, 30-35).’”

This was not Gabriel’s first appearance in the gospel, however, for before appearing to Mary, Gabriel visited Zechariah in the Temple.

“Once when Zechariah was serving as priest before God and his section was on duty, he was chosen by lot, according to the custom of the priesthood, to enter the sanctuary of the Lord and offer incense. Now at the time of the incense offering, the whole assembly of the people was praying outside. Then there appeared to him an angel of the Lord, standing at the right side of the altar of incense. When Zechariah saw him, he was terrified; and fear overwhelmed him.

But the angel said to him, ‘Do not be afraid, Zechariah, for your prayer has been heard. Your wife Elizabeth will bear you a son, and you will name him John. You will have joy and gladness, and many will rejoice at his birth, for he will be great in the sight of the Lord. He must never drink wine or strong drink; even before his birth he will be filled with the Holy Spirit. He will turn many of the people of Israel to the Lord their God. With the spirit and power of Elijah he will go before him, to turn the hearts of parents to their children, and the disobedient to the wisdom of the righteous, to make ready a people prepared for the Lord.’

Zechariah said to the angel, ‘How will I know that this is so? For I am an old man, and my wife is getting on in years.’

The angel replied, ‘I am Gabriel. I stand in the presence of God, and I have been sent to speak to you and to bring you this good news (Luke 1:8-19).’”

Gabriel, then, is the angel of the first Advent of Christ. Gabriel announces the coming of John, the prophetic predecessor to the Messiah, and also announces to Mary that she will become Theotokos (Godbearer). When we gaze up at this beautiful figure, we are reminded of when God came among us in great humility and inaugurated the story of our salvation.

On the right side of the triptych is another angelic figure, Michael. Michael is vested, by tradition, as a Byzantine bodyguard, and in his hands Gabriel’s lily has transformed into a sheath of stars. This is a symbol of Michael’s presence at the end of time, a dramatic and metaphorical vision of which appears in Revelation:

Michael, then, is the angel of the second Advent of Christ. When we gaze up at him, we are reminded that Christ will come again to judge the living and the dead, and at that day all things will be brought to their perfection and evil will be vanquished for ever.

I hope you will look up at the triptych with fresh awareness this season, and see in these two angelic messengers the meaning of Advent: Christ has come and Christ will come again. In the meantime, Christ is among us now, in the Sacrament celebrated each week at the angels’ feet, and in the love we share as a Church, Christ’s Body in the world.

Fr. Casey became the fourth rector of Transfiguration in October 2014 after having served churches in Rhode Island and Houston. He is married to Mtr. Melody Shobe, also an Episcopal priest, and they have two daughters, Isabelle and Adelaide. Fr. Casey grew up in Temple, Texas, and holds a Bachelor of Arts from the University of Texas at Austin. His Master of Divinity was earned at Virginia Theological Seminary and his Doctor of Ministry at the School of Theology at the University of the South (Sewanee). He loves playing golf, road cycling, hiking, brewing beer, and working in his yard. You can contact Father Casey by email.